In the article Where Does Money Come From? we looked at how money is created by debt in today’s economy and how the system requires that lots of people be in debt all the time. Going back to our $10 trillion theoretical fractional reserve system money supply we’d have this: 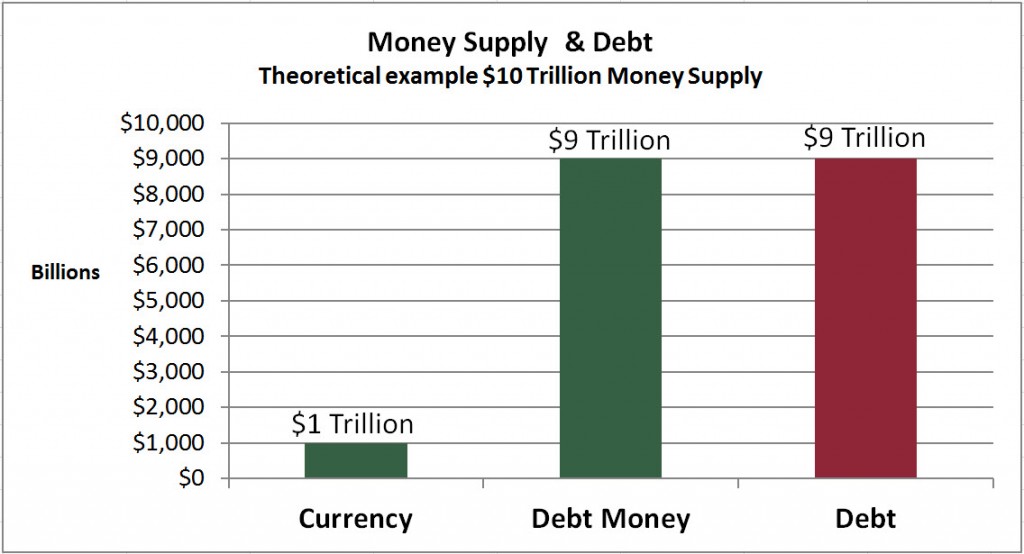 In this example, $9 trillion in bank loans have been used to create $9 trillion in bank-account money. That bank-account money is being used to pay salaries, buy groceries, pay rent etc., and as long as it’s used for goods and services it keeps circulating in the economy and paying for many different things. However, all the borrowers whose loans have been used to create that money have made agreements to pay the money back. Whenever a borrower pays loan principal back to the bank, that money stops circulating—it just disappears from the overall money supply. The money supply increases when banks make loans and decreases when borrowers pay principal back to the banks.

So if the economy is chugging along happily on a $10 trillion money supply, all that has to happen to strangle it is for people to stop borrowing and start paying down debt, or for banks to stop lending. The supply of money is completely at the mercy of the bank lending system. Like this:

Plus all that debt has to be paid back to the banks with interest. The interest payments don’t extinguish money from the supply—that money goes into the banks’ own coffers where it can be used by the banks to pay salaries and other expenses, so it may continue circulating in the economy. But what this amounts to is that home owners paying on their mortgages, graduates paying on their student loans, and all the other borrowers are essentially paying the banks to keep the economy supplied with money. The borrowers are saddled with constantly paying rent to the banks for the money supply that serves the whole economy.

You could stop right there and figure out that this is not the best way to create money for an economy, but there are additional problems.

In our theoretical comparisons of debt and money so far, we’re been considering only bank debt, but there are other entities that lend money. Banks are the only ones who can create money when they lend, so any other lending must be done with money that was already created by a bank. And there are many types of investments that work like non-bank loans.

Bonds and what’s called “commercial paper” are examples. In this type of investment, the investor buys an agreement (a “security”) from the issuing company or entity. The agreement states that the purchase price plus interest/profit will be paid back to the investor by an agreed upon date. Basically the investor is lending money at interest to that company or entity. To show how this affects the flow of money, let’s look at a very simplified example. (To keep it simple, we’ll ignore the interest and just look at what happens to principal.):

Suppose Mary takes out a $10,000 bank loan and pays the money to Bill for doing a remodel on her house. When the bank makes the loan to Mary, it creates $10,000 of new money. Now let’s say Bill invests the money by buying a bond or debt security from Company A. Company A spends the money into the economy by paying it out as employee compensation. Mary happens to be employed by Company A and is owed a big bonus. She’s paid $10,000, which she promptly uses to pay off her loan with the bank. The $10,000 has now been uncreated. But…Company A still owes Bill $10,000 plus interest/profit. Where is the money going to come from? 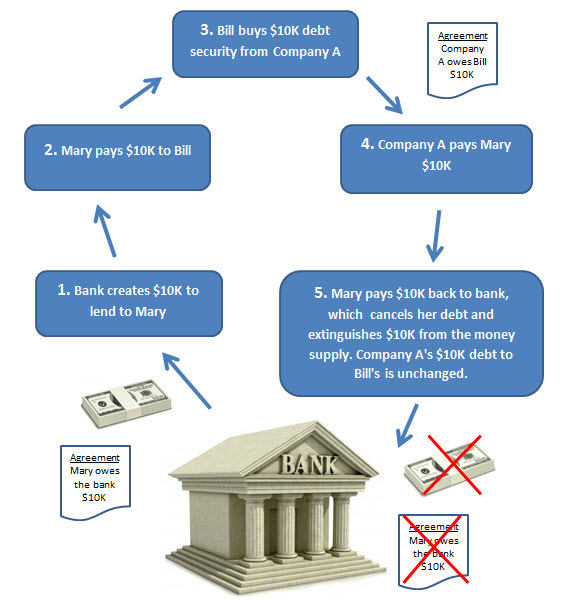 Once the debt-investor economy gets its hands on debt-created money, the money becomes twice-loaned but only once created, and overall debt can become greater than money.

The selling of loans by banks is another practice that feeds this phenomenon. If you’ve taken a mortgage loan from a bank, you may have received a notice a few months later saying that some other institution had taken over your loan and you would now be sending your payments to a different address. What’s happened is that another institution has bought your loan as an investment. It is common practice for banks to sell loans this way in what is called the secondary market.

Going back to our scenario from Where Does Money Come From?, let’s suppose we start with this little balance sheet section:

Now let’s say Lois wants to invest the $81,000 she has in her account by buying Fred’s loan. (In real life there are institutions involved—the banks don’t ordinarily sell loans directly to private parties, but the operating principles would be the same.) Below is what would happen to the bank’s balance-sheet section:

The sale of the loan wipes both the asset and the liability off the bank’s balance sheet—they’re still balanced, and they’ve cleared the way for making more loans. The money in Lois’s account has been uncreated just as if she had used it to pay off the principal on the loan, and the loan agreement has been taken off the Asset side of the bank’s balance sheet. However…the $81,000 debt wasn’t uncreated, it’s just moved out of the bank’s hands and into Lois’s hands. Fred is still $81,000 in debt. This has the same effect as money being lent in the secondary market. The debt multiplies while the money stays the same.

A couple of important things to notice in this graph: On the money side, the lowest block is currency and the next one above that is what’s called “demand deposits”. That’s checking accounts, simple saving, or other bank accounts where depositors can take money out whenever they want. The large block above that, representing almost 75% of the total, is money that’s in longer term savings deposits and certain types of investment funds. It’s money that isn’t circulating in the working economy.

The producing economy is trying to operate using only the lower two blocks. And it’s trying to pay that huge debt block on the right. Clearly it doesn’t have a prayer. So what it does instead is try to avoid default. It does that by paying the interest, paying enough principal to keep from going delinquent, and…by borrowing more money.

Though it may often appear to be engaging in wasteful abundance, the producing economy is suffering from a severe scarcity of money, and it’s working under a system where the only way to get more money into the system is to borrow it. So we have a vicious circle where the necessity to pay the existing debt creates this horrible scarcity of money, and the only way to relieve the scarcity is to borrow more money, which aggravates the scarcity, which is only relieved by borrowing more money…

Notice that in 1960 debt was just a little more than twice the supply of money. By 2010, it’s about four times as much. The graph below shows the same figures only without the adjustment for inflation, which gives a slightly clearer picture of what’s happening mathematically.

Following the tops of the debt bars you can see the steepening curve. If you’re familiar with the concept of exponential growth, you may recognize what’s often called a hockey stick curve.

Debt isn’t the only thing forced to grow in this economic model. To feed the expanding debt, the whole economy has to grow. It has to expand whether the people in it need it to or not. Manufacturing must increase, sales must increase, and consumption must increase. Businesses have to expand to stay afloat. Their marketing departments are furiously dreaming up more and cleverer ways to convince more and more people that they need to buy more and more stuff—stuff that uses valuable resources to produce and then often gets sent to landfills a few years later. But we have to do this to keep the economy going. 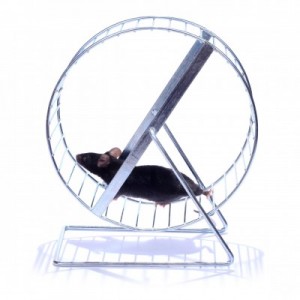 Further, since the money scarcity and debt pressure keeps increasing, economic growth becomes more and more of a squeeze play. Businesses in the working economy must grow, but overall they have less and less money to do it with, so they’re continually trying to get more from less. The trend is to cut the work force, cut wages, cut benefits, cut the quality of the product or service, and of course, outsource the labor to foreign countries with low wages and poor labor protection—anything that can be done to get more out of less.

In the context of the debt based economy, it makes sense to travel 10,000 miles to the other side of the planet and set up operations to produce something that could have been produced at home so you can ship it 10,000 miles back to where it’s going to be used.

It should be noted that the conditions described above are also fed by the capitalist business model of making increasing shareholder profits the primary driving purpose of a corporation. But a related and arguably more fundamental cause is the money system itself and the constant payment of interest from the working economy to the financial sector.

For a deeper look at how our money system affects wealth and income inequality, see Why does the wealth gap keep getting worse?